While this is not a direct record detailing Arthur St. Clair’s life in Thurso, this is an attempt to write about the town during his time. Hopefully, it will give you some idea regarding the town layout and what he would have eaten and witnessed while living in the most northerly town of the British mainland.

Arthur would have spoken the local dialect/ English. He might have had some knowledge of Gaelic, and if so, possibly very little. The language never had a stronghold in Thurso. In the parishes it did, it was rapidly being supplanted by English.1

Two years before Arthur was born, Aeneas Bayne wrote his A Short Geographical Survey of Caithness in 1735. He wrote of Thurso that it was “a neat little fashionable town, thrice as large as Wick and 12 miles distant from it. There is one principale street, severale wynds, and sufficient buildings...”

Here Bayne was writing off the streets of High Street, Shore Street, Durness Street, Bank Street, Wilson Street, and the Cowgate, with small interconnecting lanes here and there. Any other streets leading to the to/ from the town would be little more than country lanes.

The streets followed a similar pattern to those during medieval times.A The town was small, with stone-built houses with slate or thatched roofs spreading out from the west side of the river. Thatched houses would have weighted ropes with stone over the top to hold the thatch down. As

there was no coal in Caithness, peat was the primary fuel, which, when burnt, would emit black smoke.

In 1735, the population of the Thurso parish was around 2,400, increasing to 2,963 in 1755. Arthur could walk from one end of the town to the other within a few minutes. On the outskirts of the town, he would have seen farm/ residential buildings dotted around.

Many buildings around Arthur’s time have disappeared through years of redevelopment. However, the front of the 17th-century Turnpike in Shore Street, the ruins of the old parish church overlooking the river, and 1 Rotterdam Street, are some which remain.B

C The last witch trial in Thurso was in 1719, when several women were arrested, just eighteen years before Arthur was born. It was in 1736, a year before Arthurs birth that laws condemning witches to death were repealed.

The parish church was Presbyterian during St Clair’s time. It was here where Arthur and his parents would have worshipped and where he was baptised. The session house on the east side of the church is where the church elders conducted their business. As well as regular church business, they issued punishments for sinners and, occasionally, held witch trials.C 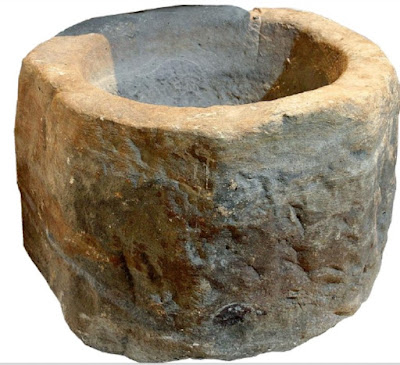 The original Town House included a Tolbooth, and the prison (the Pit of the Tolbooth) at the junction of Davidsons Entry and Bank Street. It was in poor condition when Arthur was living in the town.

In 1760, the Baron Bailie Court Book described it as “a place declared unsufficient as a prison or for keeping courts in these past four or five years… a place of confinement very unfitt, not only from unsufficiency but dangerous otherwise.” That same year, the spire which held the clock collapsed, falling into the building and the building quickly went to ruin. 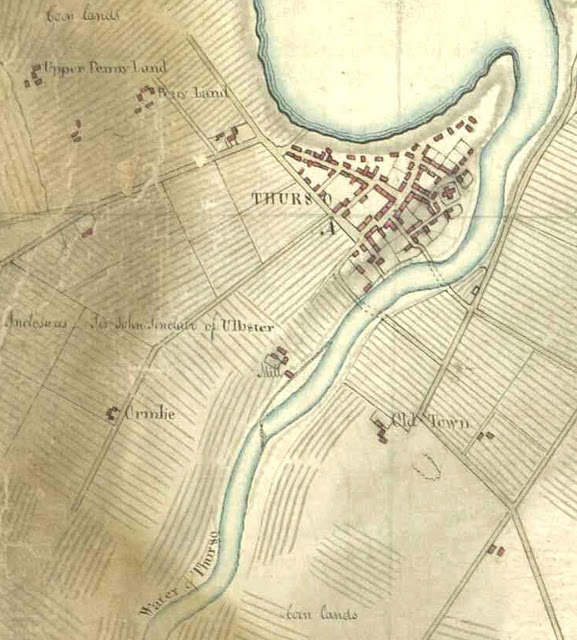 Caithness was known as a prominent producer of grain, and Thurso became the trading capital of the north from as early as the 14th century. The town exported grain to Norway, Sweden, Denmark and the Baltic. Thurso had a considerable shipping trade and was the most important settlement. So great was the town’s importance in trade, King David II of Scotland (1324–1371) decreed in 1333 that the unit of weight established in Thurso become the “standards of the kingdom.”

Thurso had been legalised to operate as a harbour in 1707 for importing/ exporting goods.D The problem for Thurso was that the river was tidal. Smaller boats used an area on the beach known as the Crook or the natural river mouth at ordinary high water. During spring tides, larger vessels could access the river mouth.E Therefore Scrabster, around two miles away, with deeper water, became the port for larger ships. In the 17th and 18th centuries, the principal exports from the town were meal, beef, pork, skins, hides, oil, tallow and fish. Imported supplies included timber, iron, salt and wine from southern ports.

D It was not until after some failed attempts, that Thurso would have its built harbour in the late 19th century.

E The Crook was used by small fishing boats where they would be beached.

Arthur’s diet would consist of meat like salted beef, mutton and pork, and fish purchased from the weekly markets. Though the family may have kept their own pigs and fowl. The primary industry of the town was the salting of beef and hides.2 Merchants in Thurso slaughtered the cattle and salted the carcasses for export.3

The price of goods in Caithness during Arthur’s time was relativity cheap. One report from around 1750 states, “ There is no county in Scotland, where vivers in general are sold cheaper than in Caithness. Good beef sells, from about the beginning of the season till about Christmas, from

It was mentioned in 1750 that there “is great plenty of cod and lesser fish upon the coast…” with residents in Thurso, like nearby Wick, employed full-time in the fishing.5

The Thurso river often supplied a good catch of salmon. The most famous account was when in July 1743, no fewer than 2,560 salmon were caught in one sweep of the net. The salmon net was carried down the river by 18 to 20 men with long poles in their hands to keep the ground rope down and the fish taken ashore by a smaller net.

In regards to farming, a later account in 1776 describes “the cornfields of great extent.”6 This led those who worked at farms to a “deadly monotony, plus however, a healthy satisfaction about the three meals that passed the day. In the morning there was porridge of oat or bear-meal, with perhaps a piece of butter, washed down with milk. At midday there were cakes of oat or bear-meal accompanied by milk, ale, or sometimes water.7 Supper brought a repetition of oat or barley cakes and brochan (a gruel made with oat-meal, seasoned with milk and butter), while the potato crop lasted, there were potatoes either eaten whole or mashed with milk and butter.”

John Brand wrote in 1701 that cattle and fish “are to be had very cheap.” He went on to say that Caithness lairds could live better upon 1000 merks (Scottish silver coins)than their brethren in the South could do upon four times as much.8

There were several local brewers of ale who had been established by 1745. Aeneas Bayne wrote thirty-five years after Brand that even in public taverns, no money was demanded for “victuals,” so presumably, the profit came from the sale of liquor.9

Hospitality appears to have been well practised with the gentry. Bayne wrote, “hospitality is cultivated and practised among them to a very great degree.10 In 1750, an anonymous writer wrote that they “are much given to hospitality and drinking.”11 There are other records of visitors who commented on their treatment.F Bayne mentioned, “This is allowed by all impartiall visitors and writers to be one of the best civilised shires in Scotland, nothing barbarous or inhumane to be seen even among the vulgar, as for the gentry, they surpass generally some of the Southern shires as much in politeness of behaviour as in nobleness of spirit and liberall education.”12

F An account from Thomas Backie, merchant in Thurso, to Sir James Sinclair of Mey shows that in a period of 18 months from 1755 to 1756, 956 bottles of claret was drunk at Barrogill Castle, plus 32 bottles and one anker of rum.

Weekly markets were held in the town from 1633, plus four free fairs lasting for three days. The weekly market was considered the cheapest in the north of Scotland. From 1728, the town superior elected two bailie’s whose powers included assisting the minister in maintaining the church and its property and schools.G They also had authority over the town markets to ensure local sellers got a fair chance of selling when outsiders came to sell goods. As part of the market laws, they ensured that the carcasses, skins, hides or tallow sold were of good quality and not minced, cut or spoiled. Cleaning streets and their repair, removing beggars and collecting dues also came into their remit.

The Marymas market saw merchants coming from all over Scotland to sell goods. Not all were welcome, as Bayne wrote of “several itinerant petty Traffickers and Hawkers frequenting the several fairs.”13 There was a case in 1745 of four visiting sellers being charged with not having obtained the permission required.

If Arthur or his family had to cross the river, they did this by using stepping stones at low tide, on horseback or by the coble, a flat-bottomed boat.H This carried worshippers to and from the east side of the river to the church on Sundays. While the distance was short, it could still be dangerous because of heavy spates in the river, stormy weather and the coble men themselves, who sometimes were not sober. In 1749, the boat capsized, and 17 people were drowned due to the “carelessness and neglect of the coblemen” who were known for overloading the boat.

H The construction of the first bridge in Thurso began in 1798 and was completed in 1800.

Any communication the family may have received came from messengers who ran daily from one country house to another and from Wick to Thurso. The Post Office opened n Thurso in 1750. Once a week, the post came North from Inverness with the Edinburgh mail and the newspapers, and the news contained in the former became as much common property as that contained in the latter.14 The roads were in poor condition, and horseback was the only means of transport. During summer, the roads could be hard, uneven tracks, whilst in winter, quagmires.15

Between 1700 and 1750, Thurso had various merchants, including weavers, snuff-sellers, candle-makers, glovers, shoemakers, joiners, a wigmaker, cordwainer, bookbinder, doctor of

medicine, a mason, gunsmith, tailors and writers (lawyers).16 In between this time, Thurso’s first Masonic Lodge and the first in Caithness opened around 1740, known as St John’s Lodge 45.

As there were no newspapers, the town drummer, bellman or piper notified the public of any announcements. They did not always carry out their duties and had to be reprimanded. Very few would have owned a watch or clock. In 1743, the piper and drummer had to be reminded that it was their duty to inform the public when they should go to bed and be awake. The towns drummer and piper were “to goe about the Town with Drum and Pype at the hours of eight of the clock at night and five of the clock in the morning….”

The announcement, made by tuck of drum, ordered residents to “kill their dogs and put them and their swine out of the way….” Within three years, the order, which appears to have had little effect, had to be revised and made more strict.

1 Bayne, Aeneas, A Short Geographical Survey of the County of Caithness, 1735

6 Cordiner, Charles, Antiquities and Scenery of the North of Scotland, Pub 1780, P83

7 Henderson, John, General View of the Agriculture of the County of Caithness, Pub 1812, P257

10 Bayne, Aeneas, A Short Geographical Survey of the County of Caithness, 1735

12 Bayne, Aeneas, A Short Geographical Survey of the County of Caithness, 1735

13 Bayne, Aeneas, A Short Geographical Survey of the County of Caithness, 1735

No Taxation Without Representation

US Bill of Rights

*** President of the Confederate States of America